According to the National Highway Traffic Safety Association (NHTSA), “Every day, almost 30 people in the United States die in drunk-driving crashes — that's one person every 50 minutes. These deaths have fallen by a third in the last three decades; however, drunk-driving crashes claim more than 10,000 lives per year. In 2010, the most recent year for which cost data is available, these deaths and damages contributed to a cost of $44 billion that year.”

WHO IS AT RISK?

The risk of involvement in a highway or city street driving accident is compounded by intoxicated drivers. Unfortunately, the risk of death from drunk drivers is not contained to the drunk driver, but spreads to passengers in other vehicles hit by the drunk driver and even pedestrians in towns and cities.

The person driving while intoxicated can be unhurt by the accident while the innocent people accidentally involved often suffer serious injuries or die. Each year more than 5,000 kids aged 16 to 20 die in car accidents. Three age groups are at a higher risk of dying in both alcohol related and non-alcohol related traffic accidents: teenagers, aged 16-20, children, aged 1 to 15 and senior adults over 65.

Alcohol is not the only reason for high automobile accident death rates among teenagers. Motor vehicle crashes kill more teenagers than any other reason and teenagers are the less likely age group to wear seatbelts in an automobile.

INJURED BY A DRUNK DRIVER?

Some of the busiest streets in the nation can be found in Houston and driving can be treacherous for new drivers and those with slower reflexes, like older drivers. Houston TranStar provides maps of roadside construction sites and minute-by-minute traffic video information about Houston's most-congested freeways to help drivers avoid frustration and better routes to their destinations.

Some current influences that do cause Houston traffic accidents, other than drunk drivers, include teen drivers not paying attention to traffic or road signs and drivers of all ages using cell phones and/or texting while driving. Houston drivers are prohibited from using cell phones in school zones, but nowhere else.

Many Houston accidents and very severe injuries or deaths are entirely preventable with some common sense and awareness. The accidental loss of life to traffic accidents, regardless of age, is growing problem everywhere and not related strictly to Houston. Drunken driving is still the leading reason.

The Ardoin Law Firm P.C. deals with all types of accidents, including but not limited to drinking & driving.

PERSONS KILLED IN TOTAL AND ALCOHOL-IMPAIRED CRASHES BY PERSON TYPE, 2018 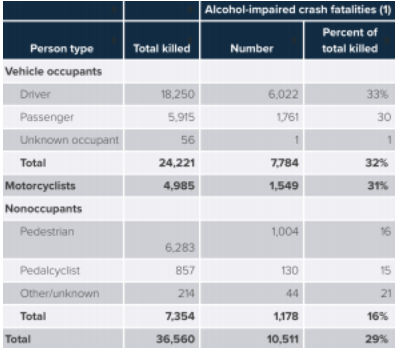